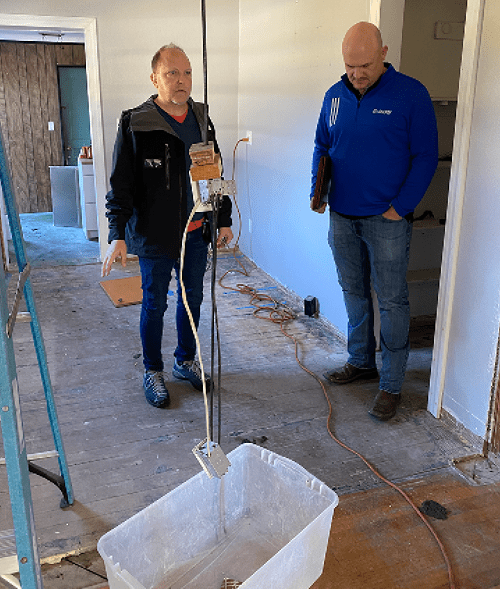 Reavis toured the home and spent time with the Zombie Flippers, Ashlee Casserly and Keith Ori, discussing what they wanted to achieve; he then designed the product recommendation based upon his findings.

Reavis described the “hellish” project: “There were 10 rooms. Some floors had uneven or cracked concrete slabs, new concrete slabs, old concrete slabs; one room featured an old mud bed, a couple rooms were the original terrazzo. The only thing they all had in common was the fact that it was a mess.”

Even though “Zombie House Flipping” is a TV show, the investments made on the properties are very real. The Zombie House Flippers needed to see a return and were worried that the floors alone on this house would eat up the profits and spell their doom.

Fortunately, Reavis and MAPEI had the answers.

About MAPEI
MAPEI is a leading manufacturer of installation materials for concrete restoration solutions (CRS), including the maintenance of cast-in-place concrete. MAPEI also produces other concrete solutions including systems for moisture mitigation, structural strengthening and concrete repair products.

Founded in 1937 in Milan, MAPEI is now one of the world’s leading manufacturers of chemical products for the building industry and has contributed to the construction of some of the most important architectural and infrastructure works worldwide. With 91 subsidiaries operating in 57 countries and 84 manufacturing plants in 35 nations, MAPEI Group employs about 11,000 staff worldwide. The foundation for the success of the company is specialization, internationalization, research & development, and sustainability.

Headquartered in Deerfield Beach (Florida), MAPEI North America consists of the subsidiaries MAPEI Corporation (for the USA), MAPEI Inc. (for Canada) and MAPEI Caribe (for Puerto Rico and other Caribbean islands), whose 28 facilities collectively have a workforce of about 1,800 employees. MAPEI facilities have been certified to ISO 9001 and ISO 14001 quality standards. An environmentally conscious manufacturer that reinvests 5% of its revenue into R&D, MAPEI offers training for architects, contractors, installers and distributors through the MAPEI Technical Institute. For more about MAPEI, visit www.mapei.com or call 1-800-42-MAPEI   (1-800-426-2734).