What challenges is the European wooden floor sector currently facing?

In this particular period, a question of this kind makes me shudder because the challenges for our sector are not only difficult; I would hazard to say they are almost historic! This critical situation has highlighted a wooden flooring production system almost completely monopolised by one type of wood (oak) and very few alternatives within the structure. This situation continues to be normal until a state of necessity is created; and we have now reached that point. We have to try and find new types of wood, new materials for backing, new ways of communicating with consumers, new colours and finishes. Basically, we need to re-think wooden flooring as a product with a wider range of solutions. I believe there will be more products with just a thin layer of noble material, because of the cost and limited availability of raw materials, and that the choice will be extended to types of wood with knots, for a more rustic effect look. This will compel us to make more effort in terms of marketing and communication to get these changes accepted through targeted information, such as the one FEP has been doing for some time with its Real Wood initiative, highlighting how important and sustainable it is to promote consumption of wood compared with many other products. And it will certainly be important that all manufacturers share in making these important choices in order to speed up and perfect the entire change process. The most difficult part is to start thinking differently. If we were all convinced that alternatives are possible, this transformation could be accelerated, at least partially. Instead, it seems to me that everyone is still trying to take things back to that idyllic state of just a few months ago, without realising that the reality is changing radically. 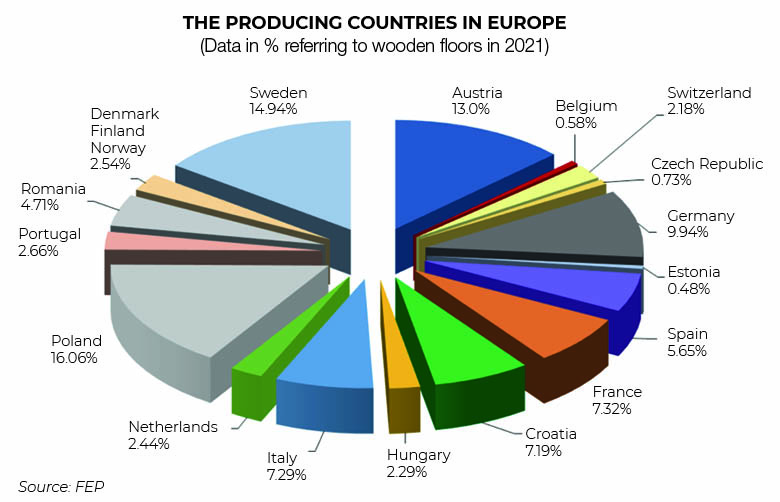 Are there problems finding raw materials in Europe for wooden floors?

The situation regarding the scarcity of raw materials and the subsequent increase in their prices started back in 2020. Then, in the first half of 2021 in particular, we witnessed a complete imbalance between supply and demand of all raw materials in general, and of wood in particular. It started with an increase in the price of pine and of “poor” materials for packaging and general construction work, and then passed on to oak and panels.

Then this situation exploded in that, after almost two years in which the global economy was stagnant because of the pandemic, the ramp-up was characterised by very high demand in North America thanks to an explosion in the new residential construction sector (which notoriously needs a high amount of wood) and the scarcity of raw materials available (considering the minimum stock levels at the various points along the supply chain).

This triggered a speculation mechanism which then hit the entire global market. The war between Ukraine and Russia definitively changed geopolitical scenarios on a global level, forcing all economic and military powers (firstly USA, China, India and Europe) to take a hard look at their alliances and, above all, the “global economy” model that had been in place until just a very few months ago.

Because of the sanctions against Russia, European producers of two-layer wooden floors, which used mainly multi-layer birch as backing, found themselves without raw materials. Not only did Russian production of multi-layer birch supply almost half the backing panels needed for the European market, but basically almost 80% of birch, in a raw material sense, comes, or should we say came, from Russia. What is more, Ukraine is a very important European producer of oak and of flooring planks. This war, even though it has not completely compromised production, has undoubtedly slowed down and reduced production capacity. As a result of all these factors the price of oak is still very high and alternatives for a large proportion of the supply, that previously came from Ukraine, are trying to be sourced from other markets such as France, Croatia, Hungary and Romania, triggering other issues regarding availability and prices, which are rising even further. These increases obviously can’t continue forever because, at a certain point, demand will no longer follow the price rises.

Are there any countries where the wooden floor industry is growing more strongly and others where it plays a more marginal role? And if so, why?

Countries which traditionally have a high production of wooden floors are, firstly, Poland, Sweden and Austria, followed by other large European countries such as Germany, Italy and France. If we look at consumption, on the other hand, the situation is different.

In this case we can see that the main consumers are obviously those countries with the highest population (Germany, France, Sweden, Italy), but the tendency to use wooden floors in percentage per inhabitant terms is undoubtedly higher in North European countries where, be it the availability of materials or because of climatic conditions, wood has always obviously been the main element used in the construction of private houses.

According to your research, what is it that most attracts consumers to wooden flooring? Have things been changing in recent years?

The amount of enjoyment consumers get from wooden floors is probably the same as they get from pizza, which is very high! This is demonstrated by the fact almost all non-natural flooring materials (ceramic, laminates, LVT) try to imitate the aesthetics of wood. Obviously actual wood cannot be completely imitated and that is why the more discerning consumers are not prepared to make compromises. It is appreciated for its warmth and naturalness, as well as for the sheer pleasure and sense of wellbeing that comes from “living” on it. And this feeling has not changed over time. What is changing is taste and, therefore, the search for finishes and colours that, in some way, are able to keep in step with the times and trends of the moment. So maybe there is less attachment to the natural aspect of a particular type of wood and more demand for particular formats and variegated colours. In the last few years, we have been seeing a return to herringbone-type patterns set at various angles and design floors that create a wonderful combination of traditional formats and patterns from a bygone age and more contemporary finishes. All in all wood, in spite of it being a classic, is still an exceptional material, unrivalled, continuously renewable (the only one!) and, above all, always contemporary.

The European Parquet Federation (FEP) brings together European-wide parquet manufacturers, national federations and suppliers in the parquet industry, representing them in institutional, legislative and commercial matters. Its main aim is to boost the image and enhance the value of parquet compared to other types of flooring. FEP is interested in every aspect of parquet from supply chains of raw materials to manufacturing, marketing and sales by collecting data across the territory, the promoting and follow-up of relevant European regulations, the organisation of a national congress, and the promotion of communication and interaction among its members. Mapei has been a member of FEP since 2008 and some of its representatives took part in the association's latest congress held on 9th-10th June in Hamburg (Germany).