The floor slabs of the 5 storey Building where constructed in a traditional 1890 – 1920 steel filler joist and a clinker concrete infill. The building was to be developed, refurbished and to undergo a change of use.

As part of the survey Four 50mm diameter cores were taken at each floor level, which provided information on the quality of the clinker concrete, it’s make-up and any voids that existed. Owing to the condition of the concrete, some of the cores broke up when being removed. The steel filler joist where exposed in 16 locations, 4nr to each floor and found in general to be in good condition with minimal corrosion evident. The only exception being the exposed openings at ground floor level, where light corrosion was evident due to poor quality, shallow depth, voided clinker concrete.

Resitech Limited consulted material manufacturer and supplier Mapei with their expert knowledge in cementitious and resin based products to provide a material that was of High Strength, shrinkage compensated, non-segregating and capable of being injected into fine cavities

Resitech Limited recommended and proposed the use of Mapei Stablicem a cementitious consolidating grout, and by using their specialist injection techniques/system and their unique “in house” design and built pumps this material would fill the voids and cracks, bind the clinker concrete, and introduce structural integrity back to the clinker concrete infill.  These proposals were approved by the Engineers MLM Consultant Structural Engineers prior to the work being carried out.

The work involved a cementitious sealing slurry being applied to the top surface of the localised areas to be grouted, the underside was also sealed. Holes were drilled on a 1m staggered grid pattern across the areas to be consolidated and injection ports inserted. Resitech Limited then injected 450 x 20kg bags (9 tonnes) of Mapei Stabilcem, an expansive super-fluid cementitious powder with special admixtures, which filled the voids within the clinker concrete.

Cores were taken after the injection process was complete and proved  Mapei Stabilcem was the correct material to be used as they demonstrated where the Stabilcem had flowed and filled voids to consolidate the slab.

The Client was pleased with the expert knowledge provided post, during and following the completion of the project 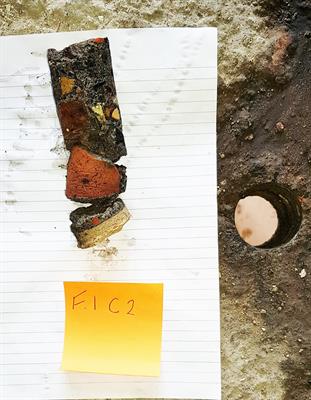