Andy Wilson Q&A - brought to you by Mapei UK 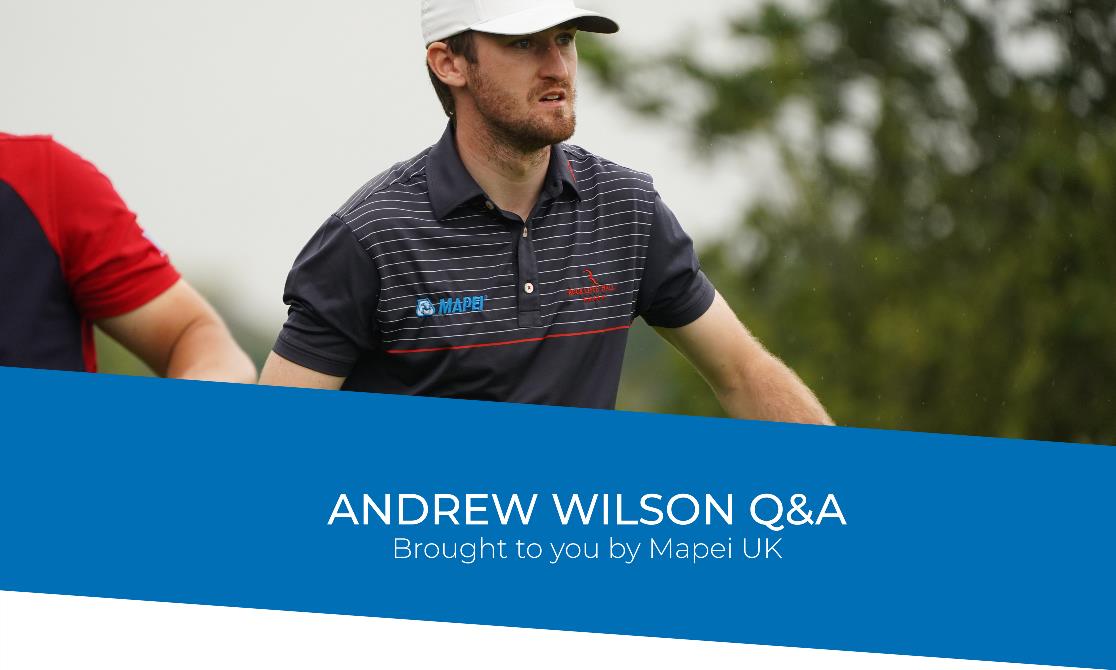 We recently caught up with Golf Tour Professional Andy Wilson, who finished 3rd in both the NI Open and Open de Portugal on the Challenge Tour in recent weeks. Here are 18 questions and answers about his career so far, including his incredible round of 59 (-9) in a Pro Am last month!

1.There is only 1 place to start, and that’s about your incredible 59! What was running through your mind before and after you hit that 59th shot?
Erm I suppose I knew the course was quite short and par 68 so as soon as I was on a reasonable score I knew the 59 was doable. Probably more relief when I birdied the last for 59 because I left a 7/8 foot putt short on 17 for birdie which was quite embarrassing.


2. Did that low score come as a surprise to you at the time?
I’ve got to say it did. I played the Monday previously and that went rather terribly so decided to change basically every club in my bag. Practiced on the Tuesday with the changed equipment and then played on Wednesday with no expectations.

3. At what point during the round did you start to think about the possibility of breaking 60?
I popped a driver on the short par 4 7th to about 6 foot, rolled that in, and knew if I played nicely after that I wouldn’t be too far off.

4. The day after your 59 you scored 60 at another course, and you have recently finished 3rd in the NI Open on the Challenge Tour. What do you think has been the key difference to your great golf recently?
I think this pandemic in a way has come at a good time for me because its given me the chance the change a few things within my golf while still playing competitively. So I’ve had instant feedback from those changes and they’re clearly working.

5. How has 2020 been for you so far as a whole and what are your plans for the rest of the year?
I’d say it’s been a massive success for the opportunities I’ve had. I’ve got a couple of European/Challenge tour events coming up in Spain so all my efforts will be going
towards them.

6. Looking ahead, what would you like to achieve during 2021 given the Covid-19 challenges that lie ahead?
Play multiple European Tour events, win on Challenge Tour and play another Major.

7. Golf is an individual sport, but the majority of tour players will have a team around them supporting them along the way. Could you share an insight about who you are currently working with, and the support that you’ve had?
Compared with most guys I’d say I have a relatively small team. I obviously have my management company in Rocket Yard Sports, my swing/ performance coach and then a PT I drop in to see whenever I’m back home. One of the key things for me are guys like Mapei who give me the security of playing golf with confidence and I hope they feel I add value to them too.

8. How important a role have your sponsors played in your career so far, and how is their support helping you to progress your career?
A massive role. I had a guy from back home help me out at the start of last year which certainly took a weight off my shoulders. And then my management company have connected me with Mapei that have done the same this year. Without their support the pressure to play would be insane, so that certainly makes the financial side of things a lot easier.

9. How often do you typically practice golf, and what are you working on at the moment?
I’m not the biggest fan of the range in the professional ranks, I’d rather hit the course and hit loads of balls out there. In terms of what I’ve been working on, I’ve totally gone away from swing technique and focusing predominantly on performance, which is what my current coach is helping me with.

10. If you were to describe your golf game in six words, what would they be?
Feels mixed sometimes but I’m consistent.

11. What’s the best tip you’ve received from a fellow tour pro?
It’s too easy when you’re at events to watch other guys and incorporate what they do because they’re playing well, or you feel like you should be doing more than you currently are. Do what’s best for you, not someone else.

12. What’s your favourite golf course and why?
Royal Lytham, because everyone shoots millions around it. Me included.

13. If you could play a round of golf at Augusta with any 3 other golfers, who would you choose and why?
3 of my mates from back home because it would be easy money.

14. Away from the course, what are your hobbies and interests?
Spend a lot of time with my girlfriend going away and more often than not overindulging. I am partial to a book and a good old Suits session (TV series).

15. Do you enjoy the lifestyle and travelling that comes with being a tour pro?
I mean its ok. I love being back home so most weeks I’m really excited to be back in my own bed.

16. What have you learned the most since turning professional?
I am good enough.

17. Last year you qualified for the Open Championship. What’s it like teeing it
up in a major?
Extremely nerve racking. But as soon as you get that first shot away you just keep your head down and just play golf.

18. Final question number 18… Which golf course in the world do you think has the best finishing hole and why?
Carnoustie. No words are needed.