Where to buy
News
Careers
Contact Us
MyMapei Login
Back

The CRH Canada Joliette Cement Plant is one of Canada’s leading specialty cement suppliers. Part of the CRH Canada Group Inc., the plant has operated for more than 50 years and its technology is constantly being refined to meet the growing needs of its customers.

The plant has the ability to design, produce and deliver cement mixes that meet project and region-specific requirements. Its four kilns operate 24 hours a day, giving the plant the unique flexibility to offer more than 10 types of cement to building materials manufacturers and construction companies from Alberta to Newfoundland. Its customer base even extends into the northeastern United States.

The CRH Canada Joliette Cement Plant uses 20 silos to store the vast amounts of cement that it produces each day. To maintain safety standards and protect residents that live near the plant, the silos are regularly inspected for concrete degradation. If any degradation is discovered, it is immediately repaired. With the size and number of silos involved, the inspection process must be detailed and continuous.

In 2017, MAPEI was awarded the contract to repair the plant’s silos using Planitop 12 SR repair mortar. MAPEI was not awarded the contract solely on the basis of its high-quality products and expert staff – the company was also chosen for its innovative approach to the complicated logistical challenge of working on these storage silos.

MAPEI PRODUCTS ON THE JOBSITE

While the plant’s silos are about 100 feet (30.5 m) high, they are not particularly wide and, as such, conventional scaffolding could not be easily used to complete the repairs.

“To set up the scaffolding in such a restrained area would have cost at least $400,000 [about CAD $534 000] in custom scaffolding,” said Michel Lafortune, the MAPEI representative leading the project. Instead of such a large sum being spent, Lafortune and PSM Technologies – the general contractor on the project – came up with a unique way to complete the repairs.

Lafortune and PSM proposed the idea of having subcontracted installers from Vertika climb the sides of the silos like mountain climbers and then rappel down the sides like spelunkers. “Vertika specializes in working at height,” Lafortune said. “They are also licensed to finish concrete. Their crew worked perfectly with the team from PSM Technologies and with the MAPEI product.”

Tackling one silo at a time, three Vertika crew members would rappel down the silo while two PSM team members stayed on the roof to monitor the safety gear and the equipment. On the ground, two more PSM crew members stayed in constant contact with the facility management and made sure that all supplies reached the top as needed. Lafortune alternated between assisting at the top and on the ground.

Once in place and suspended from harnesses, the three-man Vertika team used bush hammers suspended on ropes to rout out the deteriorated areas. “We had to make sure that nobody approached the silos while we were doing the surface prep,” Lafortune said. “The bush hammers dislodged pieces of concrete, which fell to the ground creating a dangerous situation. So we cordoned off a 6-foot [1.83-m] perimeter around the base during this work.”

Next, the three-man climbing team used a pressurized pump and hose – lowered on ropes – to apply Planitop 12 SR. Resistant to sulfate attack (which can deteriorate concrete and reduce concrete strength) and well suited for vertical surfaces, the one-component, cementitious repair mortar was the perfect choice for this highflying project. “One guy sprayed, one guy finished, and one guy handed equipment to the other two. It was very smooth and sequenced – like a ballet,” Lafortune said. “It was the first time that I have seen anything like this in my 30 years of concrete repair in Quebec.”

Lafortune added, “In Europe this is a common repair technique, but this is the first time that I’m aware of this method of working at height being used for concrete in Canada, maybe in the U.S. It was a huge savings in time and money. We saved at least $400,000 [about CAD $534 000] on the scaffolding alone. The team was less tired because the ropes held all the equipment for them – they worked faster and accomplished more. We only had to pause because of the winter weather. And the owner is very happy with the results and with Planitop 12 SR.”

The project proved to be a great success. Now protected with a MAPEI repair mortar, the plant will continue to supply cement mixes for the foreseeable future. 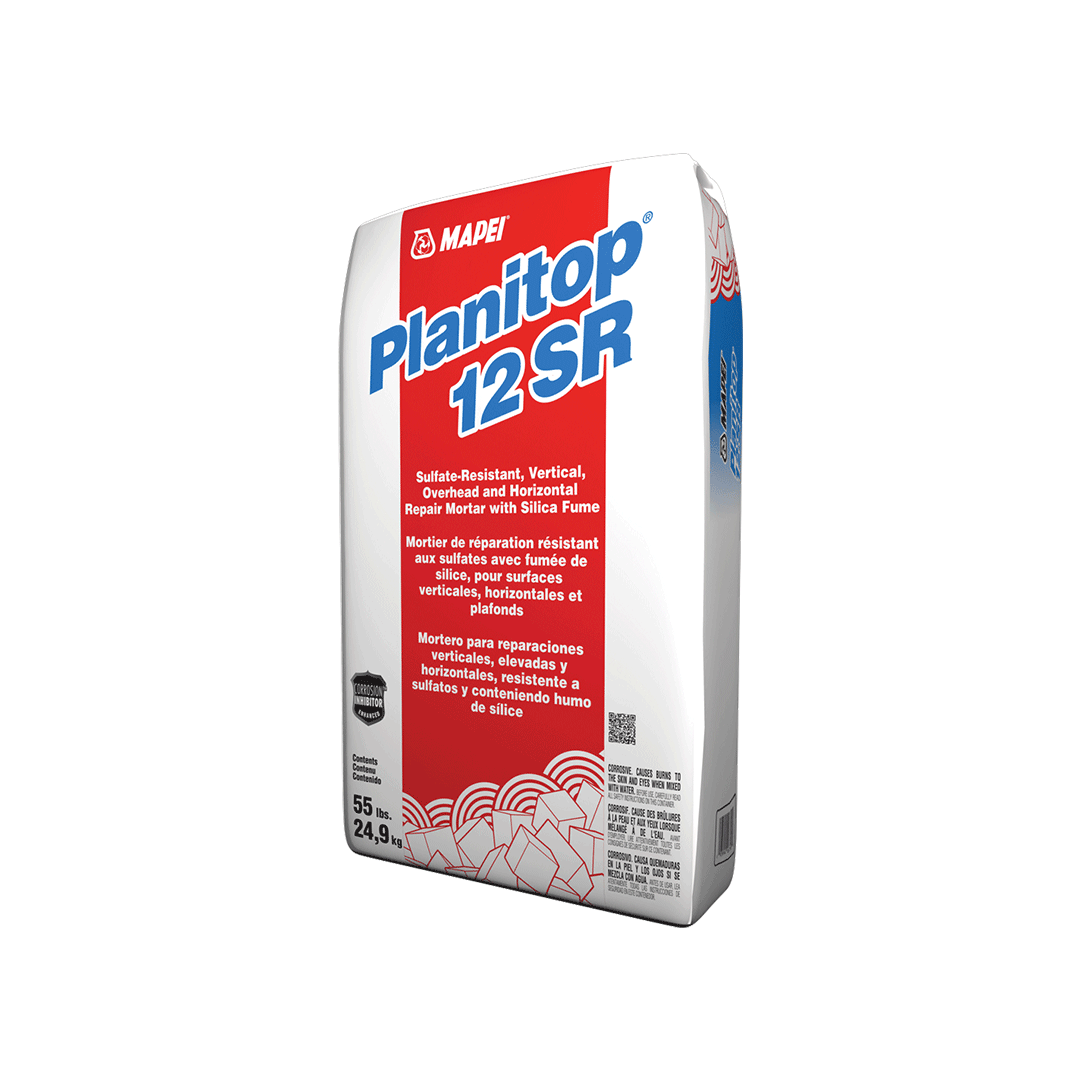