One of the problems at any construction site or in any building is that of water leakage. Leaking water not only damages the structures but it also damages the aesthetic look of the structure. Water leakage causes growth of fungus and algae; it also causes dampness and leads to the peeling of paint. Over a period of time water leads to structural damage. Even though there are many waterproofing products available in the market today, the problem of water leakage still exists, and the various stakeholders such as the real estate developers, the contractors, the end customers, are always looking out for a product that would solve the problem effectively and still be affordable.

In this article we will discuss about the idea to reduce the frequency of problems which may be traced back to incorrect design specifications and problems caused by incorrect or shoddy installation techniques. According to recent figures, more than 50% of claims for damages involve infiltration, while more than 60% of these claims are due to problems with the waterproofing layer. It is quite clear, therefore, that the principal type of intervention which needs to be addressed is the waterproofing of old structures. And MAPEI, as experts in this field, have a range of quality systems available, and not only for waterproofing and decorating floors, but also for repairing substrates (in concrete and brick) deteriorated by the aggressive action of water.

In order for terraces and balconies to become a space where everybody may enjoy their spare time, we must not limit our attention to simply applying a waterproofing system; we must also consider a number of other aspects such as structural stresses, the correct slope, the way they blend in and particular care for the joints.

As with all materials, a cementitious conglomerate has certain chemical and physical characteristics directly connected to particular types of deformation, some of which are manifested immediately, while others only show up with time, generated especially by the curing of the conglomerate itself. Structures are subjected to various types of deformation (thermal, dynamic, shrinkage, etc.) during their working life and every type of deformation must be carefully assessed during the design phase. As far as the behaviour of terraces and balconies is concerned, it is common knowledge that these structures are subjected to all the types of deformation mentioned above, which act both on the  structure of the balcony itself and on the superstructure, the screed and floor, and on which structural joints, control joints and expansion joints must be created.

Structural joints are interruptions in the structural continuity of manufactured pieces made by placing a physical separation piece between two adjacent bodies. They are the same depth as the manufactured piece and several centimetres wide. Their function is to absorb structural stresses (subsidence of the ground, winds, seismic activity, etc.), functional stresses (vibrations, transitory oscillations, etc.) and thermal stresses (expansion and contraction of the materials). The depth of control joints or contraction joints is generally around 1/3 of the thickness of the cementitious conglomerate and are made by cutting into the surface with a diamond-tipped disk after the conglomerate has hardened (usually 24-48 hours). They do not eliminate cracks caused by hygrometric shrinkage, but help to contain their formation and width so that any cracks that form do not provoke functional or aesthetic problems. Expansion joints are interruptions in the continuity of the surface, created to absorb thermal expansion in ceramic floors or floors in other materials, for example.

For cementitious screeds suitable for use on balconies and terraces, firstly, it would be useful to analyse the various types of screeds: • isolated (unbonded); • floating; • bonded.

Table shows the diameters of rainwater manifolds inside and outside buildings according to their flow-rate and slope, considering a filling rate of h/d=0.8 (80%)

2.3 DIMENSIONS AND DESIGN OF COLLECTOR SYSTEMS FOR RAINWATER

The first precaution to be adopted is undoubtedly to design and create the correct slope to encourage rainwater to flow into dedicated outlets to avoid the formation of pools of water. Systems to collect rainwater are regulated by the European Standard UNI EN 12056, which replaced UNI 9184. The size of drains for rainwater depends on the maximum amount of precipitation during intense rain storms

3.0 WATERPROOFING SYSTEMS FOR TERRACES AND BALCONIES

The dynamic and physical stresses to which the structures in discussion are subjected imply that the waterproofing layer possesses high performance characteristics. Not only it must have the capacity to guarantee waterproofing, it must also increase the durability of the structure and follow it when it deforms. In waterproofing applications, and more so than in any other sector, attention to details makes all the difference. The quality of the products used guarantees their water-tightness and meticulous laying of the products guarantees their continuity and full compliance with their respective Technical Data Sheets. The points where railings are attached, drains, channels, fillet joints between horizontal and vertical surfaces, joints in general and the other critical points are fundamental elements which must not be overlooked. And it is exactly in these points that an “attention to detail” improves the already excellent quality of MAPEI products. With their “attention to detail”, MAPEI clearly demonstrate their know-how, by offering simple, sure technical solutions. Therefore, it is incorrect to talk about a single waterproofing product. We should rather talk about waterproofing systems, comprising a group of indispensable products to guarantee that a system is watertight, and which MAPEI offers with each and every one of their components. The MAPEI products which form waterproofing systems for structures above ground are as follows: 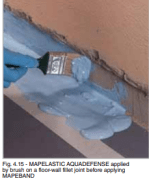 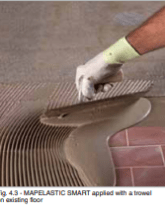 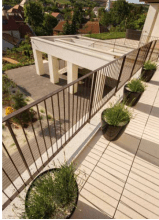 Login or Register
to MyMapei Area to insert your comment