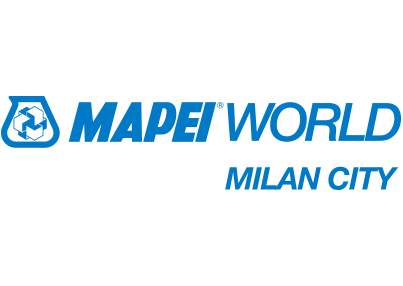 Specification Centre, where your project comes to life

Being involved right from the very start when the building specifications are drawn up means helping architects and designers during the delicate stage of listing all the operations and supplies required for carrying out a given project in accordance with the approved executive design.

At the Milan Specification Centre, the company’s most qualified staff in every realm of building support architects/designers during the delicate selection phase, striving to anticipate any potential problems already during the design phase.
BOOK A CONSULTATION

Mapei is backing the Get your Spire Project

Mapei has joined the group of Major Donors of the Veneranda Fabbrica del Duomo and associates its own history, dating back more than 80 years, to the most important symbol of Milan.

By joining the project “Get your Spire. Carve your name in History”, a fund-raising initiative launched in October 2012 by the Veneranda Fabbrica as a way of involving the inhabitants of the city – private citizens, companies and associations - Mapei is offering its support to the restoration work on the 135 spires of the Duomo of Milan, whose history has always been closely associated with the generosity of important families and illustrious patrons.
A simple gesture but one that gives you the chance to associate your own name, the name of your family or the name of a company with one of the spires of the Duomo in need of care and constant maintenance and restoration work so it may continue to splendour above the Milan skyline, as it has done for more than half a millennium.
The spire is chosen by the donor in agreement with the Veneranda Fabbrica del Duomo, and their name is engraved in the marble as testimony of their commitment to support the “eternal factory”.

Mapei has chosen to adopt a spire near the Central Terrace of the Duomo on the northern side. Its top is adorned with the statue of a youthful looking saint dating back to the middle of the twentieth century, thought to be a reproduction of a statue from the nineteenth century. The face of the statue has an intense expression and is turned three-quarters with respect to his body. Dressed with a drape that leaves his thorax and back uncovered, the statue’s arms are gathered on his chest, he is barefoot.

«Mapei is a global company that is proud of its Milanese heritage and of its bond with the city. Adhering to the project initiated by the Veneranda Fabbrica del Duomo represents a wonderful opportunity to associate the name of Mapei with the symbol of Milan. And it is also another example of our commitment to supporting cultural initiatives in the city and of our solidarity with the city», commented the CEO of Mapei, Giorgio Squinzi.

By joining the project of the Veneranda Fabbrica del Duomo, Mapei intends – once again – to express their Milanese identity and export it all around the world where the company is present with 82 subsidiaries and 79 facilities. The Duomo is a cathedral but, above all, it is the church of the people of Milan. But that’s not all: it is the symbol that represents Milan all around the world and is the driving force behind the city from a tourism, cultural and religious point of view. The figures speak for themselves: 80% of the visitors (more than 2.2 million tourists per year, to which we must also add the worshippers) come to Milan to see the Duomo which – according to figures – accounts for an estimated 82 Billion of the value of the Milan brand, which is estimated to be worth 400 Billion.

The Duomo, Milan, the world. An “ideal” path which characterises the history of Mapei. The company and the Squinzi family have always emphasised their strong bond with the city and exalted their Milanese background and heritage within an increasingly global context for the company. A bond that has seen Mapei taking an active part in numerous initiatives in support of the city, first and foremost the Duomo, where its products and cutting-edge technology have been adopted to restore and waterproof terraces and to provide protection for a number of architectural features.

“The Get your Spire initiative has another important supporter: Mapei which, thanks to the sensitivity and generosity of the Squinzi family, has decided to carve their name in the marble of the Duomo in response to an appeal launched by the Veneranda Fabbrica to support restoration work on the Cathedral. A number of interventions are currently ongoing: from the imposing restoration work on the Tiburio spire and apse to completion of the lighting system. The Veneranda Fabbrica has costs of around 30 million Euros every year and we need patrons who, like Mapei, offer their support to this great challenge for Milan, as well as providing their expertise and professionalism for our various sites. Our intention, in fact, is to form a collaboration between the Mapei research laboratories and the Veneranda Fabbrica to identify and test new materials that could prove to be more suitable for the Duomo and its specific needs. Along with the fund-raising drive, this is another way of supporting the Cathedral and helping the Fabbrica in its very difficult task: a modus operandi inscribed for centuries in its genetic heritage, because the people of Milan have always supported its construction by also donating their expertise. Our wish for the future is that other companies, particularly from the Lombardy Region, will also follow the example of Mapei”, were the words of the President of the Veneranda Fabbrica Del Duomo di Milano, Fedele Confalonieri.

Mapei’s commitment to supporting important cultural and artistic events and their solidarity with the city of Milan dates back many years: borne out of the firm conviction of Rodolfo Squinzi, who founded the company in 1937, that “work can never be separated from art and passion”. A conviction which, in recent years, has been clearly demonstrated through the company’s work on the refurbishment of the Teatro alla Scala, to which Mapei contributed by providing systems, cutting-edge products and expertise, a result of their commitment to research and innovation. The relationship with the Teatro alla Scala has been strengthened over years, starting in 2008 when Mapei became a Founding Member, and then again in 2016 when Giorgio Squinzi became member of the Board of Directors. And again in Milan, the company consolidated their collaboration with the Leonardo Da Vinci National Museum of Science and Technology as a Technical Partner for the exhibition areas.

Other initiatives that bond Mapei to the city of Milan are their sponsorship of the Verdi Orchestra and the No’hma Space Theatre and the refurbishment of the theatre in the C. Beccaria young offenders’ institution.

And lastly, for the EXPO exhibition, Mapei offered their contribution by providing products and engineers for the construction of important regeneration and redevelopment projects around the city, such as the new Dock, the M5 metropolitan railway line and various support networks and infrastructures.

Founded in 1937 in Milan, Mapei now has 82 subsidiary companies, including the parent company, and 79 production facilities in 34 different countries in all 5 continents, with a consolidated turnover of €2.4 Billion and 10,000 employees around the world.
The foundations for the success of the company are specialisation in the world of building by offering certified products and systems to meet the requirements of clients and market demand; internationalisation to be more in tune with local needs and to reduce transport costs to a minimum; Research and Development, which receives the most support from the Company in terms of both investments and human resources. 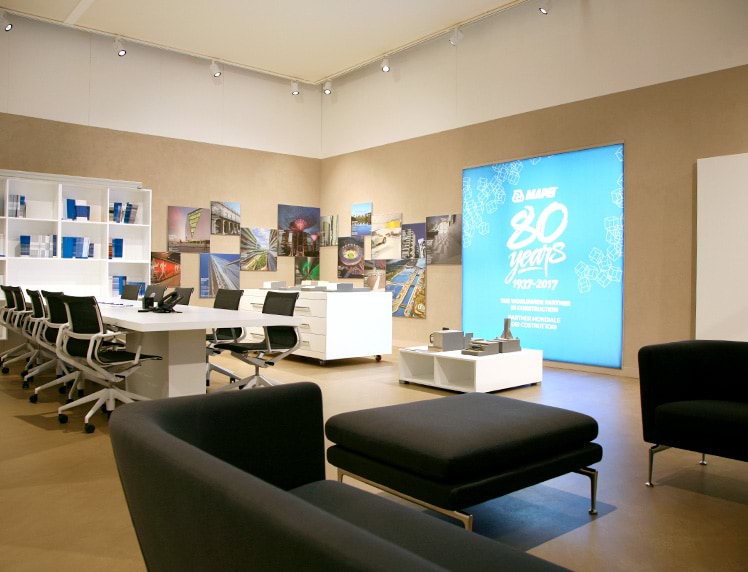 The Milan Specification Centre was designed according to very specific architectural guidelines aiming, once again, to place architectural designers and professionals working in the building industry at the focus of attention. This new facility promises to be a cutting-edge centre providing practical support and information during the entire “specification process” the materials to be incorporated in the specifications.

Each of Mapei’s product lines is visualised in a set of charts, textured samples and prestigious projects references, accompanied by video clips about installation procedures and plenty of support literature, thereby providing architects, contractors and designers with all the assistance required to fully “specify” the Mapei products to be included in the specifications. Across-the-board consultancy also aimed at guaranteeing the complete safety of architects/designers, while offering them a team of “certified” Mapei installers.

The setting is professional-looking, and the minimal furnishing is designed not to be a distraction but to actually enhance concentration so as to focus better on the various aspects the project A Centre of Excellence right in the heart of London devoted to cutting-edge design for building projects worldwide.

A Centre of Excellence right in the heart of London devoted to cutting-edge design for building projects worldwide.

Mapei World: a network of Specification Centres in London, Milan, and Paris.

Mapei World: a network of Specification Centres in London, Milan, and Paris.

Mapei World Paris, a place of excellence in the heart of Paris

Working closely with our customers and on major projects

More work/interaction facilities for professionals of the building industry.

More work/interaction facilities for professionals of the building industry.

Mapei Specification Centre around the world