Mapei Football Center, 45,000 m² of training center built in two years, was born thanks to a convention between Sassuolo Calcio and the Municipality of Sassuolo, based on a 40-year concession of a municipality-owned area in Cà Marta to implement and manage a sports promotion plan.

The black&green training center is another important step on the club's growth path.

“Today is an important moment in the history of Sassuolo Calcio,” says Giorgio Squinzi, owner of the black&green club, “another achievement that confirms Mapei's strategy and choices in the sport’s world. Mapei has always been linked to sport with which it shares the same values: Team effort, search for excellence, passion and enthusiasm.  In managing the team, we apply the same philosophy we adopt on the company: We continue to invest in order to achieve lasting results over time.  The opening of the center is, in this respect, an investment in view of further important goals Mapei Football Center will be a structure of excellence in the field of sports facilities and of support for the first team and the youth ones, as well as a meeting point with fans and the territory through the multiple initiatives and integration projects that Sassuolo Calcio will carry out here”.

After its owned-stadium, MAPEI STADIUM, the club’s crown-jewel, which, in addition to the 6 Series A championships of Sassuolo, hosted the Women’s Champions League Final, the Italian National team and the Euro U21, Sassuolo Calcio has its new home: A state-of-the-art training center.

President Carlo Rossi’s words during the new training center’s opening: “To see Mapei Football Center today is like to see a dream come true.  It will certainly be a great boost for the activities of the first team and the Youth Sector, and I believe it will also give pride and prestige to the city of Sassuolo.  If someone had told me, 15 years ago, that we would find ourselves in Serie A with both the Men and Women’s Team, and with a total of 21 teams wearing the black&green jersey I would never have believed it.  This new Training Center confirms the vision and foresight of the Squinzi family and Mapei Group, to whom I am very grateful”.

Thanks to the synergy with Mapei, Sassuolo Calcio has created quickly a facility made of six pitches, one with a covered stand, which will host the training sessions of both the First and the Youth Team, a main building and two minor buildings. The main building is located between two football pitches and has the same length: On the ground floor, the public functions and the first team, on the first floor, the youth teams and on the second floor the club’s office.

“For Sassuolo Calcio, it's an important achievement to inaugurate the training center today.” Says Giovanni Carnevali, CEO and General Manager of Sassuolo Calcio “It will help us to keep growing: Having the youth sector and the first team side by side means making the two departments work together.  A single space that can accommodate all the functions and people of the Club will enable us to constantly improve, getting feedbacks from one another every day.  Speaking of the project, values such as solidity and concreteness have emerged, we will do everything we can to put them into practice day by day, in a very simple way, working together with the ambition of improving every day”.

Giancarlo Floridi and Angelo Lunati, architects of Onsitestudio, which carried out the project, describe this new sporting complex: as follows:

“The volume of the building arises from the overlap of this sequence of spaces and functions.  The project is an efficient and inventive response to a specific functional program.  By its form, the project proclaims that it is a unique type of building, for which there are no reference types.  The traditional origin of this mass volume, of its earthy aspect, of the curved facade, offers a special and delicate monumentality.  The repetition of the structure and unit of the building's material refers to the agricultural or industrial architectures of the barracks or furnaces that characterize the Emilian landscape. Using simple and strong materials, and highlighting the structure that builds it, even inside, the building transmits the values of strength, sobriety and duration, according to the values expressed by the team.”

For the construction of the entire training center, carried out by Colombo Construction srl, the most innovative products, solutions and systems of Mapei Group were used.

The inauguration also became an opportunity to open the doors of the new training center to the institutions present, to local and national press, with a guided tour throughout the three floor building (plus a basement floor) for a total of 6,000 square meters (in annex the technical datasheet of the training center).

This afternoon, to complete an absolutely 'historic' day for Sassuolo Calcio, the training center will be exceptionally open to the public for the black&green fans, an opportunity to celebrate this new achievement together.

Games and activities on the pitch with our staff, creative workshops, music and entertainment were carried out for our youngest fans and their families. An unforgettable day for Sassuolo Calcio and their fans. In the future, Mapei Football Center, as well as being the new headquarter and training center of the U.S. Sassuolo Calcio, will be integrated and open up to the territory and its people through many projects. U.S. Sassuolo Calcio has always carried out many activities aimed at integrating policies and promoting the dissemination of sporting activities, through initiatives of social responsibility. The aim will be to offer educational activities by disseminating the social values of integration, solidarity and respect through Football and Sport. 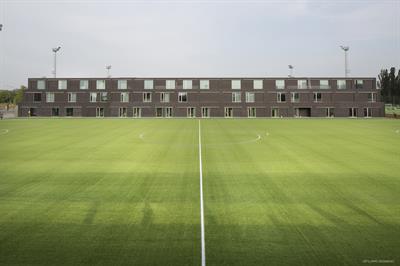