Daxing International Airport in China was inaugurated on 25th September, 2019 and is set to become the biggest in the world in terms of number of passengers. Mapei also took part in the execution of this project, which was designed by the Joint Design Team, a super-group formed by uniting the forces of Zaha Hadid Architects and ADP Ingénierie, by supplying cementitious paving to surface the maxi car park.

Daxing International Airport, for which the Chinese government has invested 17 billion dollars, extends over an area of 1.4 million m2 and is expected to have up to 72 million passengers passing through by 2025.

Other collaborators in the project included the Beijing Institute of Architectural Design and China Airport Construction Group Corporation, which designed the terminal, runways and air-traffic control systems.

To build the maxi car park, which has room for more than 5,000 parking spaces, 600 of which with charging points for electric vehicles, the main contractor asked Mapei Technical Services to come up with the best solution possible to surface the concrete substrate.

After cleaning the substrate the surface was treated with a coat of MAPEFLOOR I 900 two-component, epoxy resin-based primer to completely fill all the pores. A second coat of primer was then applied, this time fillerized with QUARTZ 0.5.

The seamless paving was made from ULTRATOP self-levelling, ultra-rapid-hardening cementitious mortar to give the concrete an attractive finish with good resistance to abrasion. The mortar applied covered a total of 80,000 m2 of car park.

The performance properties of ULTRATOP lived up to the expectations of the client and the designers and met with their complete satisfaction, which convinced Mapei Technical Services to propose the same product for the next airport projects scheduled for Xiamen, Chengdu and Urumqi. Self-levelling, ultra-quick hardening mortar with special hydraulic binders, applied at a thickness between 5 and 40 mm to create… 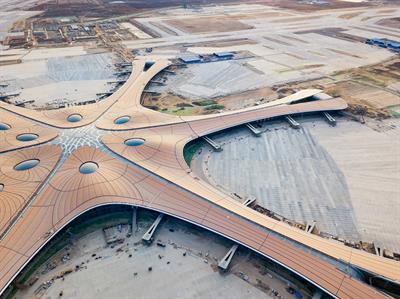