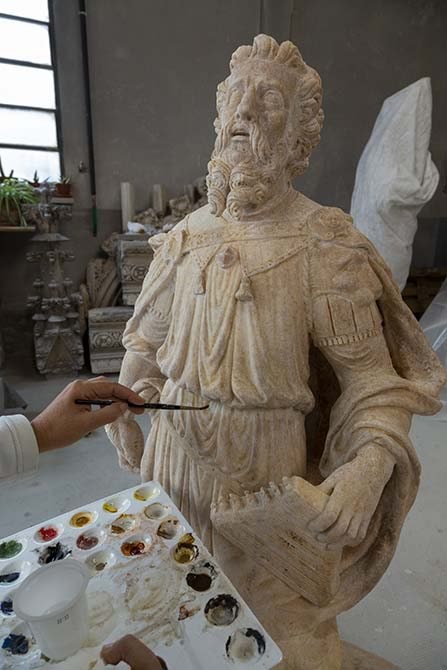 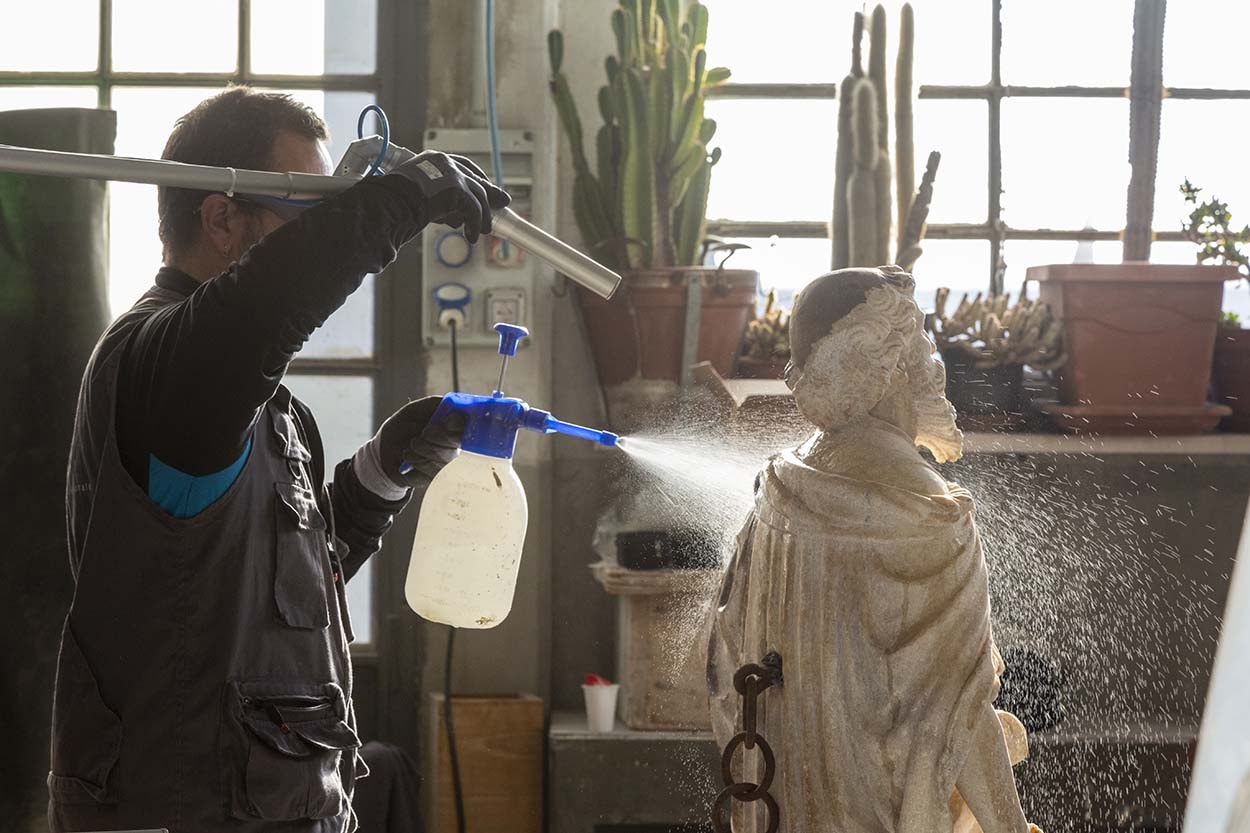 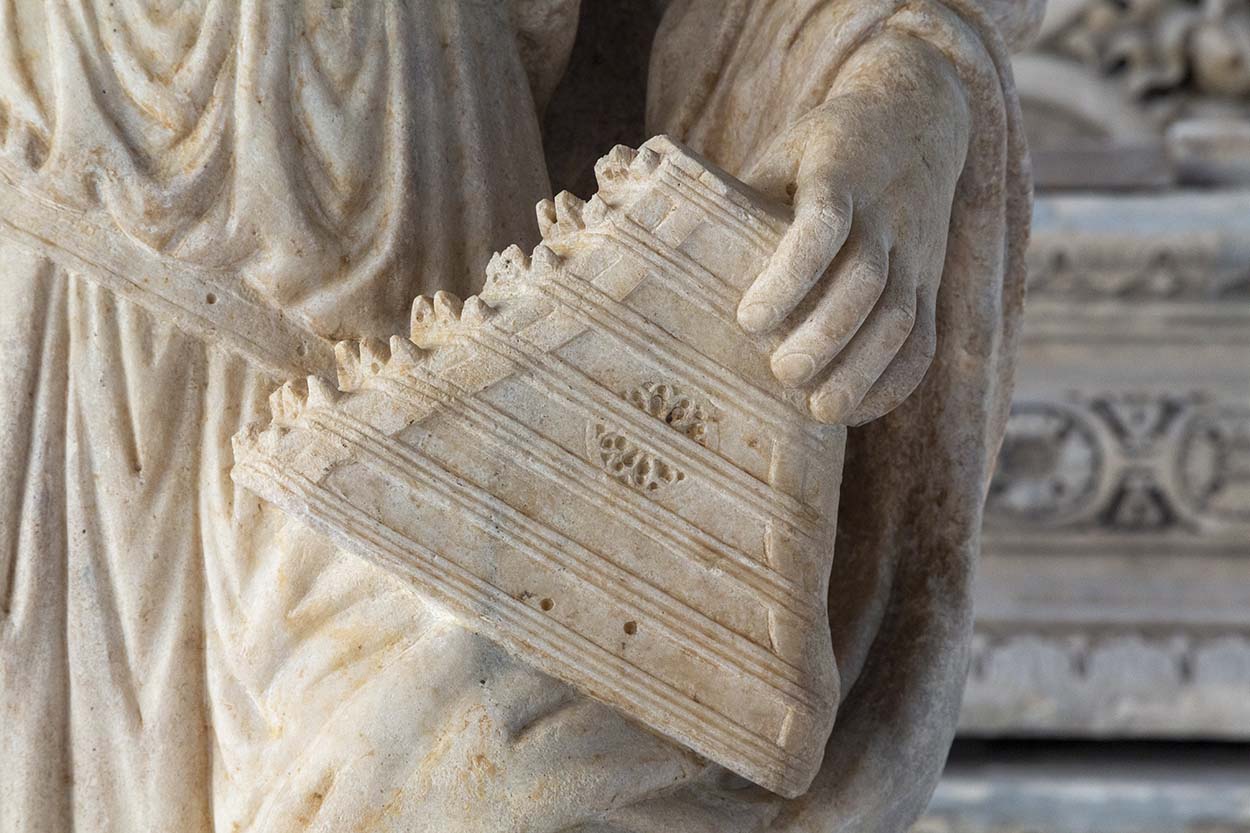 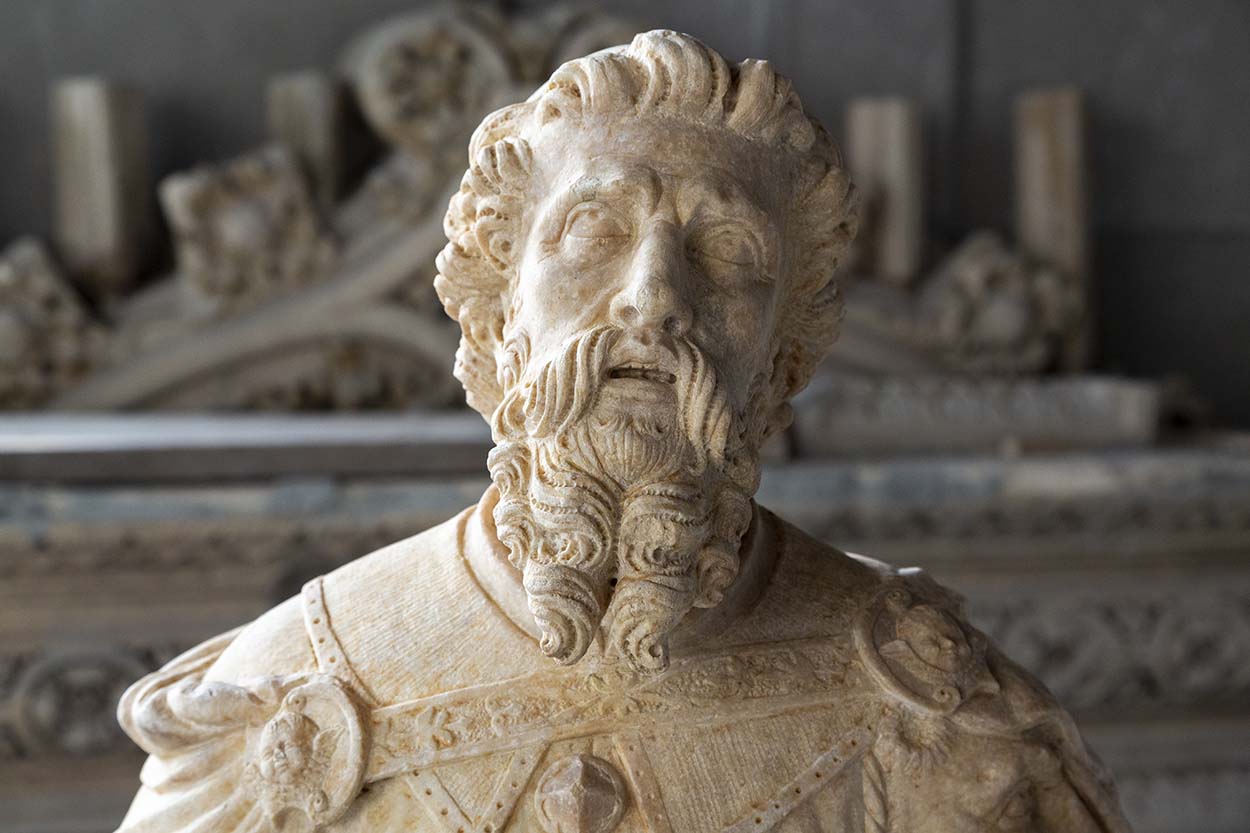 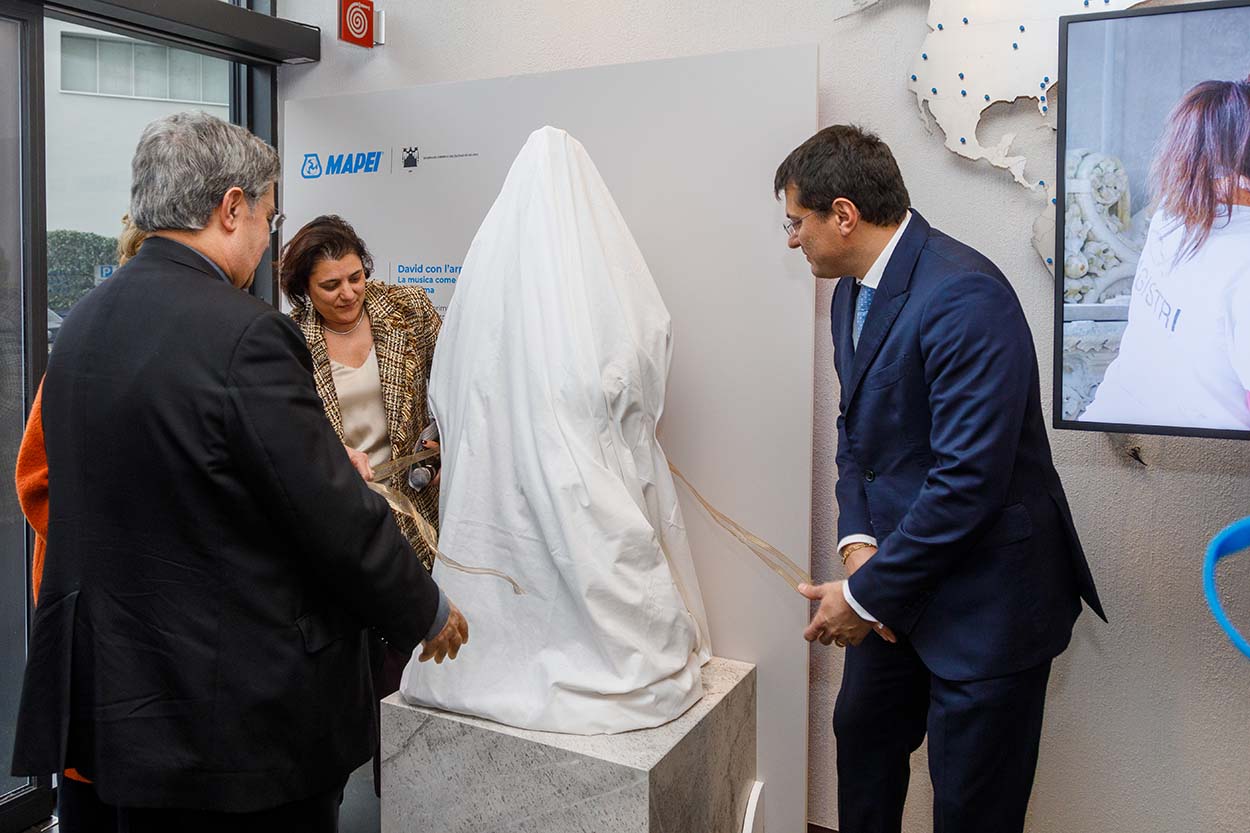 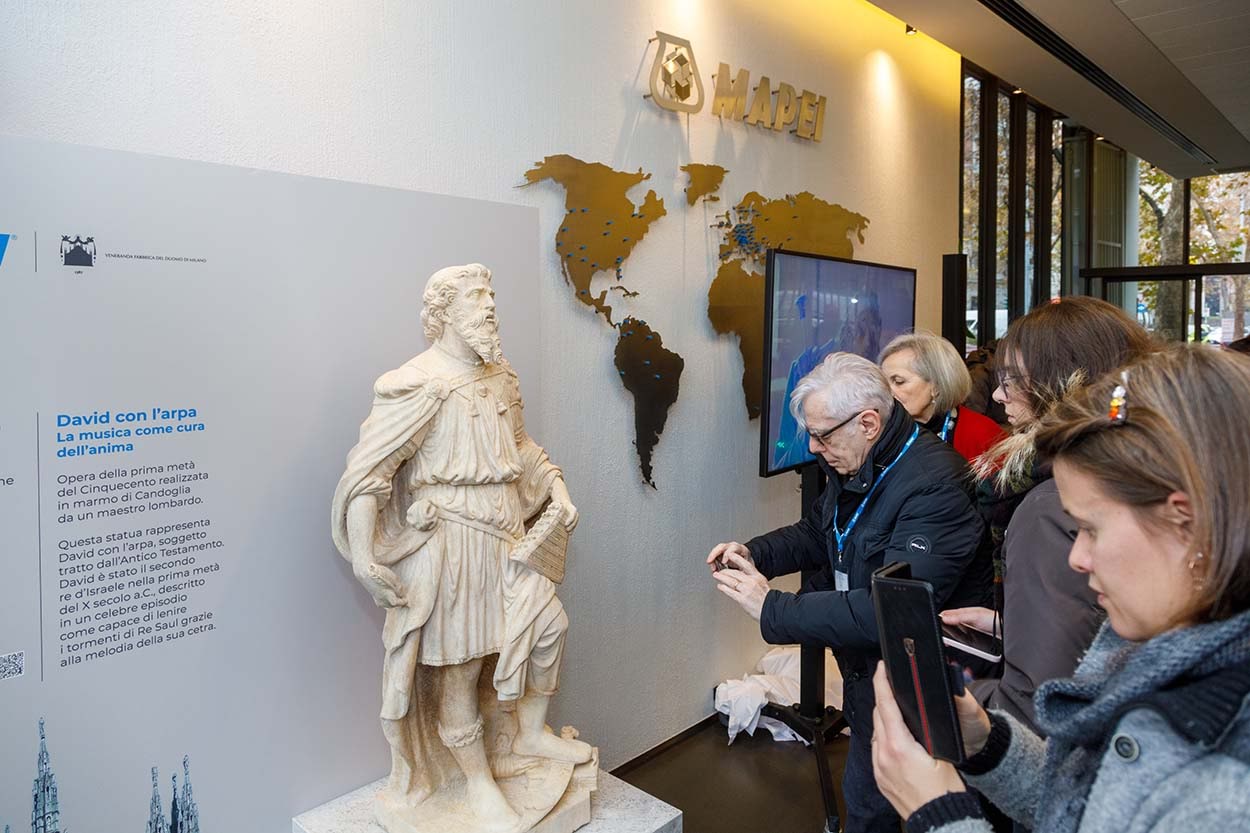 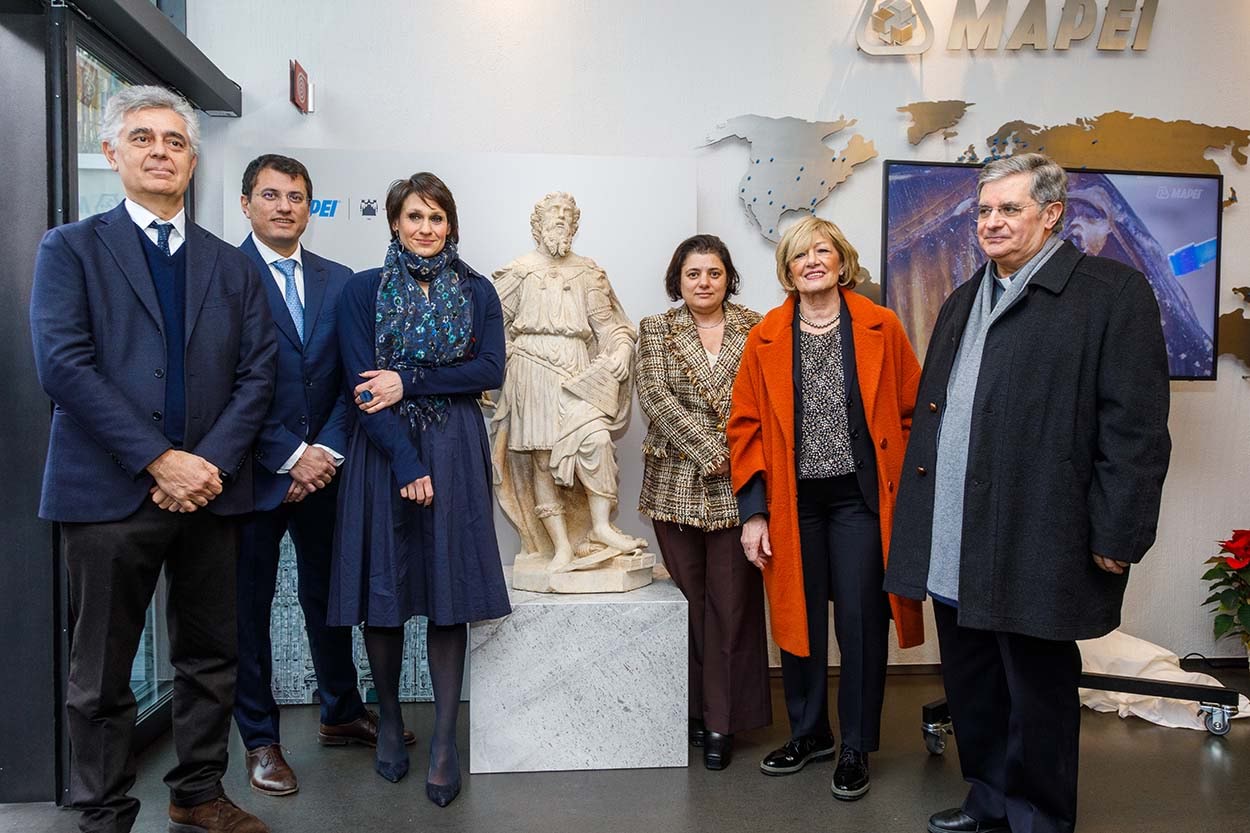 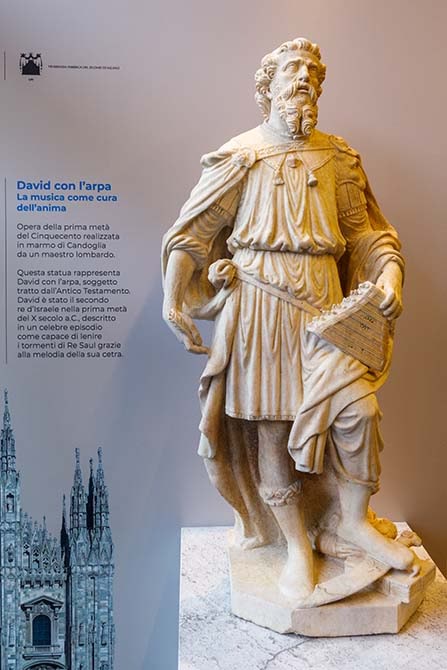 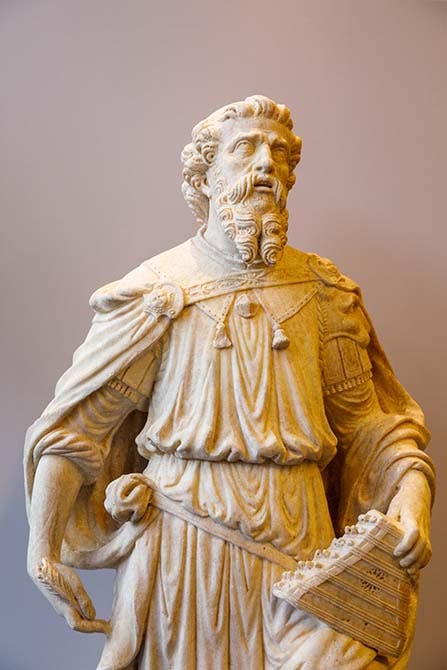 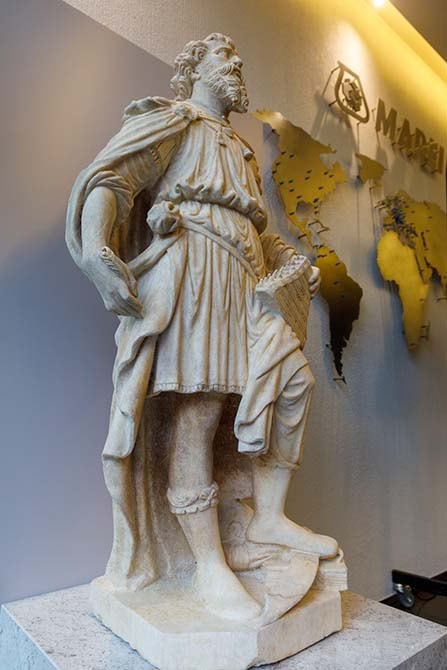 Mapei confirms its interest in and support for Duomo Cathedral, a symbol of Milan around the world, by bringing one of the Cathedral statues into its head offices.

A fascinating sculpture depicting David with a harp that has been fully restored was unveiled today at Mapei’s headquarters in Viale Jenner, where it will remain for a year (possibly longer). This statue of David greets people walking through the entrance hall of the head offices in the same way countless statues in Duomo Cathedral in Milan have always greeted visitors: they silently observe and watch over all many faithful, city folk and visitors walking in the shadow of the cathedral spires.

The company joined the Adopt a Statue project that was set up to showcase some of the sculptures which, for conservation reasons, can no longer be kept at the Duomo of Milan and are now being stored in the Cantiere Marmisti, a workshop on the outskirts of the city where new sculptures designed for the cathedral are made and more fragile ones are looked after.

The work was unveiled in the presence of Elena Buscemi, President of Milan Municipal Council, Veronica Squinzi, CEO of Mapei, and Fulvio Pravadelli General Manager of the Veneranda Fabbrica del Duomo di Milano.

"This minor enterprise has a great symbolic value for me," Veronica Squinzi stated. "Every day, all of us will pass by this statue on our way to work and proudly remember what Mapei has achieved so far in the name of research, innovation and social engagement. But, above all, we will be encouraged to keep on helping conserve and pass on our historical, artistic and architectural heritage to future generations".

"The Duomo has been supported by the people of Milan since 1387 through their spontaneous support. Indeed, the cathedral was not built by a few important families but thanks to the generosity of so many women and men down the ages. Not to mention those corporations that were the forerunners of today's businesses. This distinctly Lombard sense of community spirit is still alive today in the Veneranda Fabbrica thanks to all those supporters contributing to fundraising projects. The unforgettable Giorgio Squinzi wanted Mapei to adopt one of Duomo’s spires. Today, I am very happy that, thanks to Veronica Squinzi’s focus on these issues, Mapei is maintaining its philanthropic support for Milan’s cultural heritage by joining the ‘Adopt a Statue’ project, proving just how important the private sector is for Duomo, the city’s symbol around the world" - so Fedele Confalonieri, President of the Veneranda Fabbrica del Duomo di Milano, noted.

Fulvio Pravadelli, Managing Director of the Veneranda Fabbrica del Duomo di Milano, announced that: "I am certain that the beautiful 16th century statue of David with a harp will be truly at home in Mapei’s head offices. Not only because Mapei, and Veronica Squinzi in particular, have always been very attentive to the cathedral’s needs and its legacy of faith and art, but because the cathedral is the home and heritage of all the hard-working and creative people of Milan. In this case, taking one of the Duomo’s statues to a place of work takes on special meaning:  the ethos of Milan is part of everyday reality at Mapei. We would like our infinite Fabbrica to become better known and, for this reason, we would like to create new opportunities to tell everybody, not just in the city but all over the world, about the pride we take in handling all the complex operations involved in looking after our Cathedral".

CONFIRMATION OF A CONSOLIDATED PARTNERSHIP IN THE SIGN OF MILAN

The Veneranda Fabbrica del Duomo began working with Mapei in 2016, when Giorgio Squinzi, CEO of the company, joined the Board of Directors of the Veneranda Fabbrica del Duomo. Two years later, in 2018, Mapei joined the Adopt a Spire project to contribute to the restoration of the cathedral's 135 spires, choosing to associate its name with the statie of the Young Saint located near Duomo’s main terrace over on the north side. This really enhanced the company’s Milanese DNA and its interest in the city’s artistic heritage, the cathedral in particular, marking the beginning of a successful partnership with the Veneranda Fabbrica. In addition to Veronica Squinzi’s membership of the Advisory Board of the Veneranda Fabbrica, Mapei was also involved in important work on restoring the Aquilonare Sacristy, completed in 2021. This work was carried out with the invaluable support of the company's technicians, who contributed to restoring the oldest and most striking part of the Cathedral to its former glory.

THE STATUE IS UNVEILED AT MAPEI’S HEAD OFFICES

The sculpture adopted by Mapei (measuring 129x62x35 cm) was created in the first half of the 16th century by a Lombard sculptor who was one of the workers at the Veneranda Fabbrica del Duomo. Initially referred to rather generically as the 'Prophet', the statue depicts David with a harp, a subject taken from the Old Testament, whose deeds are narrated in the two books of Samuel, Chronicles and certain Psalms. David was the second king of Israel in the first half of the 10th century BC and in a famous story he is described as being able to soothe King Saul's torments through the melodic notes of his zither. For conservation reasons, the statue was removed from its original location in the 1960s; it was then placed on a shelf in the horizontal section of the cathedral’s south transept. Cantiere marmisti made a copy of in 1966-1968, which can still be seen in the cathedral today on shelf no. 149 of the south transept, visible from the cathedral square. The original, which was previously exhibited in Duomo Museum, was taken off into storage at Cantiere marmisti after renovation and has now been moved again to Mapei’s head offices.

The sculptures bear witness to and tell the story of the Duomo and its close ties with the surrounding territory, "whispering in the ear of all those willing to listen to its ancient and secret stories", in the words of the romantic poet and writer Heinrich Heine, who was struck by the vast array of over 3,400 statues decorating the Cathedral. This is where the Adopt a Statue project began, an enterprise organised by the Veneranda Fabbrica, which, partly thanks to a partnership with the Metropolitan City of Milan’s Superintendent’s Office for Archaeology, Fine Arts and the Landscape, is primarily focused on restoring these historical artefacts by offering them to companies and private individuals on temporary loan in return for a contribution towards the restoration of the Cathedral.