The year was 1925. Bathtub gin, the Charleston and a new form of entertainment called “motion pictures” were all the rage. Money and people were flowing into California in search of a new gold rush – Hollywood fame. Those newly minted movie stars, as well as their wannabes, made the trek down the coast from Los Angeles to a sleepy, little seaside town called San Diego in search of rest and relaxation. The unspoiled waters offered fishing. The mountains provided hiking. And San Diego’s Mission Beach featured the West Coast’s version of Coney Island, The Mission Beach Amusement Center.

Built on the sands of Mission Beach by one of San Diego’s leading developers, sugar magnate John D. Spreckels, The Mission Beach Amusement Center was designed to draw tourists to San Diego. The center promoted the city and, not so coincidentally, Spreckels’ real estate ventures. It featured the Giant Dipper Roller Coaster, a 2,600-foot-long (792-m) wooden thrill ride with two 18-passenger trains. The center’s other main attraction was The Natatorium, an indoor swimming pool constructed from stucco and steel in Spanish Renaissance style as the centerpiece of the park. Later renamed The Plunge, the pool measured 60 x 175 feet (18.3 x 53.3 m) with a capacity of 400,000 U.S. gals. (1 514 165 L), making it the world’s largest saltwater pool for its time.

The beachfront center thrived during the lean years of the Great Depression as it offered cheap entertainment. It grew in popularity as the bustling port city of San Diego grew during World War II. By 1940, however, the saltwater had begun to damage The Plunge’s filtration system. So, with a few modifications, it became the largest indoor, heated freshwater pool in Southern California.

Eventually, in 1955, the entire Mission Beach Amusement Center complex was renamed Belmont Park and was sold to a series of “private owners.” By the early 1970s, the pool and the roller coaster had fallen into disrepair. By 1976, the park was closed. A citizens group saved the complex from demolition by having the site declared a National Historic Landmark, but both the Giant Dipper Roller Coaster and The Plunge remained closed as they did not meet modern fire and earthquake safety codes. They stood empty for years – echoes of a San Diego that seemed lost in time.

In 1988, portions of the complex reopened as a commercial shopping center featuring restaurants and tourist-attracting shops, including a revamped version of The Plunge that had been updated to modern safety codes. Although much of the original tilework was removed, some historic features were left intact, including steps leading into the pool and a pedestal at the bottom of the steps.

Fast-forward to 1990 when the Giant Dipper was finally brought back into service after a $2,000,000+ renovation. The entire Belmont Park complex was back in operation with both The Plunge and the Giant Dipper, as well as a boardwalk full of shops and restaurants, to once again draw tourists and locals to Mission Beach. The area boomed. But in 2014, the waters of The Plunge once again became troubled, and the historic public pool was closed for “unexpected repairs.”

MAPEI PRODUCTS ON THE JOBSITE

Owned by Pacifica Enterprises (a San Diego-based development company) since 2012, The Plunge shut down in 2014 due to unsafe conditions stemming from a leaking roof. Pacifica took the opportunity of the closure to completely renovate the natatorium literally from the ground up, or rather from the roof down. Pacifica spokesman Chris Wahl said that initially the company believed that they could simply repair the building and the pool, but deeper inspection revealed other issues besides the leaking roof, such as corrosion in the structure’s steel columns and beams.

As the inspections progressed, it was determined that all 21,000 square feet (1 951 m2) of the building had to be demolished, leaving only girders surrounding the historic pool. The new natatorium features a glass facade instead of the original Spanish Renaissance stucco walls that did not withstand the constant buffeting from saltwater spray. The historic pool was also given a facelift and returned to the splendor of the past – courtesy of Lusardi Construction and Christian Brothers Flooring & Interiors, working with MAPEI.

“From the beginning, Pacifica and the general contractor, Lusardi Construction, knew that they wanted a period-correct feel for the tiling in the pool and the surrounding rooms,” said Dennis Sandell, MAPEI’s TSIS sales representative for San Diego and Palm Springs. “They contacted Mark Columbus at Christian Brothers to act as the consultant and installing contractor. It was Mark who brought MAPEI on board early on. In fact, he and I helped to put the specification together.”

Columbus and Sandell proposed using MAPEI for a full system that would allow the pool to be filled with water 72 hours after the tile was installed.

“The pool’s surface was shotcrete,” Sandell continued. “It was in bad shape. The Christian Brothers crew had to float the substrate with a dry pack of Mapelastic 315 with Planicrete AC in the mix to adhere to the surface, as well as to add flexibility to the mortar bed.”

The spec called for period-correct 3/4" x 3/4" (19 x 19 mm) tiles, which were installed using MAPEI’s Granirapid System. The premium, rapid-setting, flexible tile mortar allowed for the “quick” installation of 1,700 sq. ft. (158 m2) of mosaics in the Olympic-sized pool. The tiles were grouted with Ultracolor Plus FA. The pool’s perimeter was caulked with Mapesil T. “The tiles mark the water line, they mark the depth, they decorate the historic pedestal, in addition to tiling the pool,” Sandell explained.

In the showers, steam rooms, bathrooms, pool area and a gym rechristened with the name “Fit,” the Christian Brothers crew first roller-applied Mapelastic AquaDefense waterproofing membrane. They then installed large-format tiles with Ultraflex LFT mortar and grouted them with Ultracolor Plus FA. For the exterior cladding, the large panel tiles were installed with MAPEI Ultralite S2 mortar and grouted with Ultracolor Plus FA.

For a pool plagued with past issues, were there any challenges on this project? Sandell chuckled at the question. “Every time something would come up on site, we [MAPEI] would have a solution,” he said. The tile installation portion of the sprawling renovation took one year from start to finish, beginning in 2018 and ending in 2019.

“The biggest problem actually gave us a great opportunity to provide a solution,” Sandell said. “After the tile contractor waterproofed the pool, the GC had to cut out several holes in the pool walls to raise the drains. We spec’ed Planitop 330 Fast for the vertical repair. This product allowed them to achieve a quick cure so that they could quickly turn around and re-waterproof these areas.”

Although as of this publication, The Plunge has yet to re-open to the public. When it does, the pool will be in all of its former splendor, thanks in large part to MAPEI. 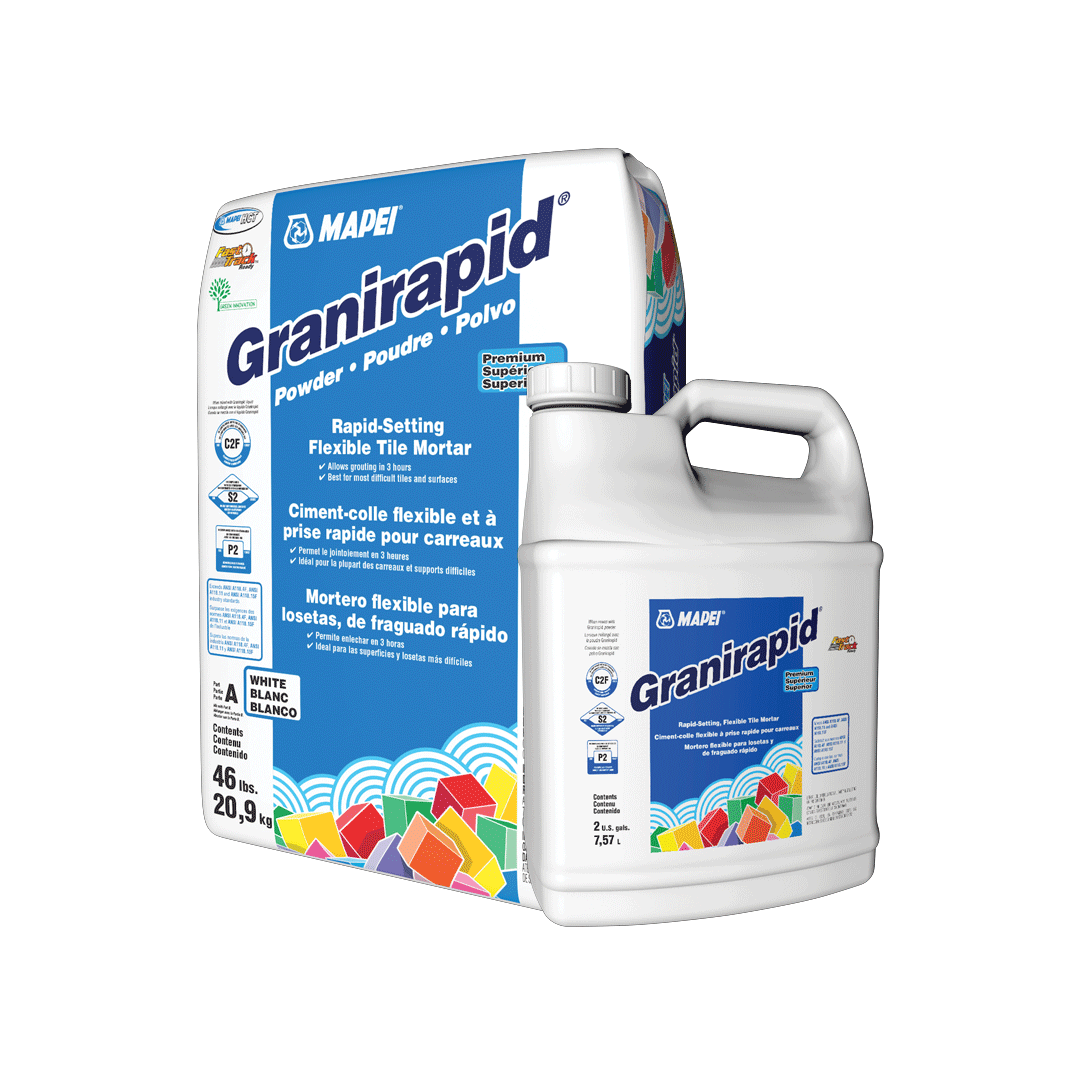 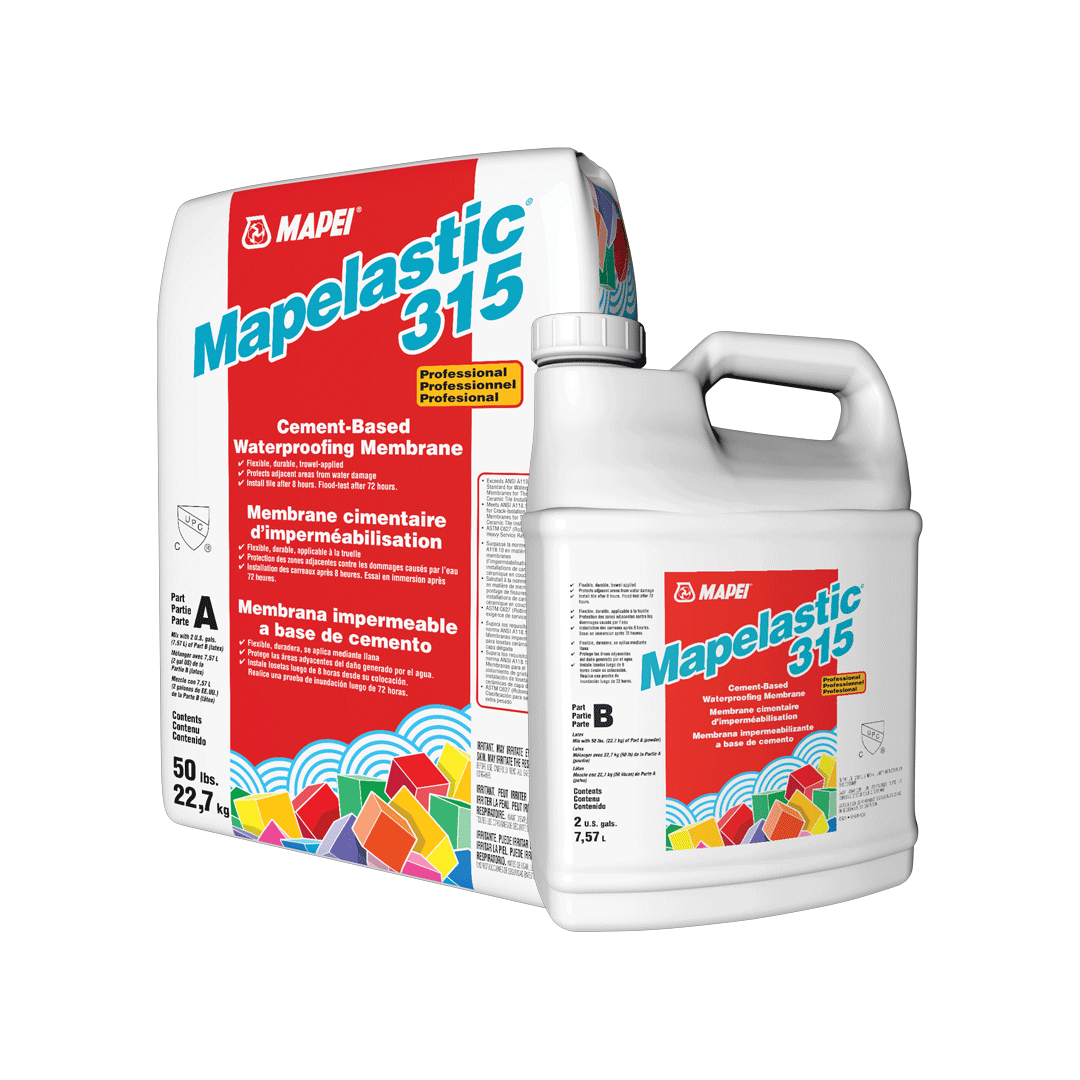 100%-Silicone Sealant for Heavy Traffic and Movement Joints Mapesil T is a professional-grade, 100%-silicone sealant for use on multiple…

Acrylic Latex Admixture for Mortar and Stucco Planicrete AC is a one-component, concentrated, liquid latex admixture used to enhance the… Rapid-Setting, “All-in-One” Grout Replacement for Sanded and Unsanded Grouts Ultracolor Plus FA with DropEffect™ technology is an ultra…